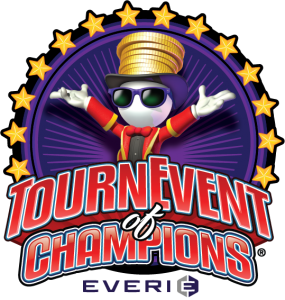 Rita Kellerman claims victory in the $1 Million TournEvent of Champions® Championship. Plans for 5th anniversary event in 2016 are underway and will include $1 million grand prize once again.

Kellerman, representing the Ho-Chunk Gaming-Wisconsin Dells casino, survived two days of loud and intense competition to become the 2015 Champion. A relative rookie to TournEvent, Kellerman says she tried TournEvent for the first time when she won the Ho-Chunk Gaming qualifier in June after tiring of other slots tournament formats.

“I can’t believe I won,” said Kellerman. “It’s all so surreal right now. This is the biggest thing that’s ever happened to me except for getting married, of course.”

The 2015 TournEvent of Champions finals pitted 182 finalists representing 99 casinos from Peru and across the U.S. in a high-energy battle for tournament slots supremacy that started with qualifying TournEvents in April of this year.

“Our casino partners do a wonderful job at hosting the TournEvent qualifiers throughout the year,” said Ram V. Chary, Everi President and CEO. “All the competitors here tonight for the finals represented their casinos with fierce competitiveness, showcasing the intensity of TournEvent. Our congratulations go out to Rita for her exciting come-from-behind victory.”

Now in its fourth year, the TournEvent of Champions has exploded in popularity.

“The success of TournEvent of Champions really belongs to the casinos running events throughout the year,” said Chary. “The format of the event adds undeniable energy to the casino floor and the casinos, along with our promotions team, do a great job of drawing in big crowds as well.”

On Tuesday, Everi kicked off the championships with its 2nd annual TournEvent for Charities event featuring a mix of celebrities, and local and industry media members squaring off on behalf of their favorite charities. In the end, Steve Burke, publisher of Indian Gaming Magazine claimed victory and the $10,000 winner’s check for the NIGA Spirit of Sovereignty. The remaining charities were winners in their own right, sharing in the $40,000 total contribution made by Everi.

Everi’s charity of choice, Save A Warrior™, also benefitted at the event as Everi presented the organization with a check for $40,000. Save A Warrior benefits returning veterans and active-duty military personnel struggling with PTSD as a result of their service.

Plans for 2016 TournEvent of Champions are already underway, and Everi expects the party to be even bigger. The $1 million grand prize will be back in play, and the five-year anniversary event is slated to coincide once again with the Global Gaming Expo in Las Vegas.

About the TournEvent of Champions

The TournEvent of Champions is a collaboration between Everi Holdings and top casinos across the country to bring unprecedented competition, intensity and glory to the casino floor through a national slot tournament, crowning the only Slot Tournament National Champion. The first TournEvent of Champions took place in 2013 with 88 players, representing 77 casinos competing for the national title and $100,000 grand prize. The two-day Championship event on September 29 and 30 will feature 182 players representing 99 casinos, competing for a $1.4 million purse.